I went to see – well, to check out – a jam session in Studio City tonight. It was at one of the oldest clubs, and the oldest jazz club, in LA: The Baked Potato (I got the ham, corn and pineapple potato).

I went ahead and signed my name on the sign-up sheet. I was the first name on the list. I went outside and introduced myself to the keyboard player. His name was Brian. He lives in New York. He was very kind and approachable.

Brian turned out to be one of Keyboard Magazine’s top four… well, keyboardists. You can read an article he just wrote  (that I literally just found) here. He was one of these laid-back geniuses who seem totally avuncular – until they melt your face off.

As I was picking up my face from off the bar counter, I asked him some questions about practicing, about getting better.

“Ah, that’s big. It’s all in your body, and how you carry your body.

“Read the Tao De Ching,” he told me. “It’s all in there. That’s the Way. It teaches how you have to do all of these things with passion, but to forget about what you’ll get from them. That’s the thing – letting go of attachment.”

Yeah, letting go of attachment. Of course. How many times had I heard that one before?

“Getting better,” he concluded, “is not an adding-to. It’s a stripping away.”

Now there’s something to ponder.

It makes sense. There’s a True Musician inside, a True Person even. And we all just want to get to it. So that’s what we’re learning. How to get to what’s already there.

And figure out this body thing. 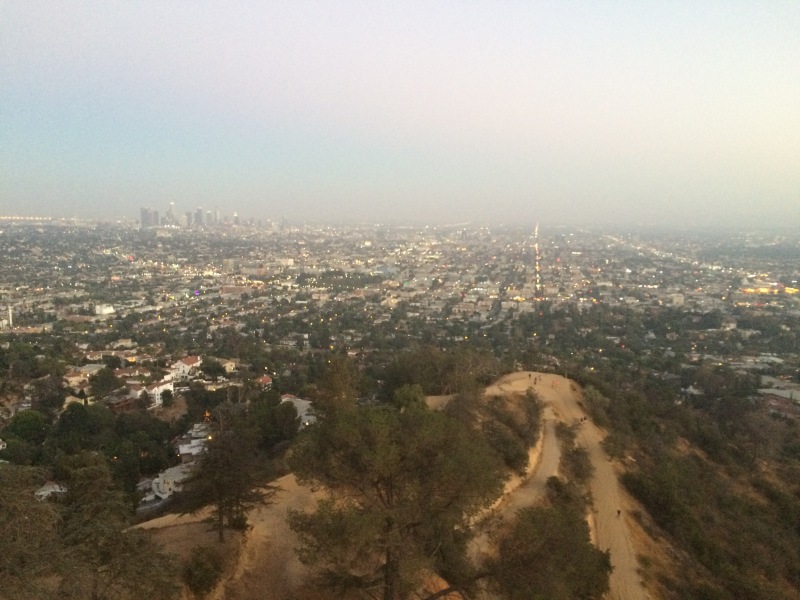 About a month ago, I said my last goodbyes to my Nashville friends and packed my little car with what I decided would be worth taking – or at least, not worth leaving behind – and shot down 40 East to Durham, North Carolina. I had agreed to take a house gig out there at a crummy piano bar called Rumrunner’s, on Martin Street, downtown Raleigh. It was a decision I do not regret, mostly because I simply got tired of being broke all the time. In any event, I knew that one Chapter of my life had ended, and another had begun.

During the move, I made two trips. (Probably not the best time to go on trips, but hey, who needs a simple transition, anyway?) The first trip was to Los Angeles, California, where I hung out with a new friend of mine, Kyran Ford, and made an even newer friend, Peter Foldy. I galavanted around midtown, drank lots of Starbucks coffee, and checked out several noteworthy spots, among them, the famed Comedy Store, where Joe Rogan and Duncan Trussell (two of my favorite podcasters) make regular appearances, and the Los Angeles County Museum of Art. 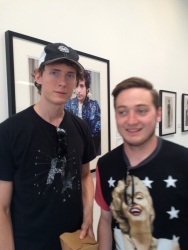 Kyran and I at a Dylan exhibit at the Taschen Art Gallery, Midtown Los Angeles. 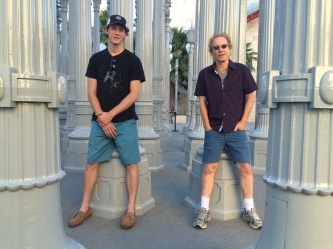 Mr. Peter Foldy and I at the Lamppost Exhibit at LACMA. 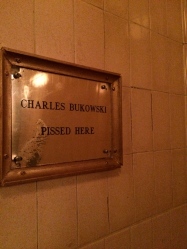 The legendary men’s restroom at Coles, where a lot of beat writers allegedly hung out. 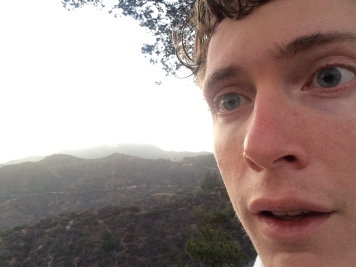 The other trip I made was this last week, back to my hometown of Buckhannon, West Virginia. My sister was to be in town from her gig out in Billings, Montana, and I thought it would be the perfect time to go home for a few days. So I did.

I learned a few things about myself over the past month. I’ll try to condense these into a readable format for the sake of clarity.

First, I discovered the importance of keeping the Right People in my life. I learned that I tend to keep folks in my life past their “expiration date.” This simply means that when one of us grows out of the relationship, I tend to hang on to it stubbornly. I’ve always been an idealist and a romantic, and so it’s hard for me to let go of associations that at one time represented a special connection for me. But when they are no longer serving me, it’s time to let them go. I won’t go into specifics, but this lesson was really driven home for me over the past month.

Another lesson – well, let’s not call it a lesson, let’s call it an interesting point – is that I am, at heart, an Adventurer. I am constantly on the verge of needing a change of scene, a new experience. Here’s a little blurb from my personal Chronicles:

… I would rather be the roving seeker, the questioning mystic, the wayfaring traveler, who seeks rest in movement and movement in rest, always wondering, always not entirely sure, always contemplative and reflecting.

Something about having Adventures keeps my soul alive and so, I’ve found, takes a higher priority than even financial considerations. This can get a bit tricky sometimes, and I’m still working on finding a good balance, but all in all I’m convinced that the Adventure is the priority. This is a big part of my personality, and I hope to make it a big theme in my blog posts to come.

To wrap, Nashville was wonderful, and I will always hold a special place in my heart for it. But it became clear that it was time to move on, and I couldn’t be happier with where I’ve ended up – for now.

If any of these realizations I’ve had about myself speak to you in any way, don’t hesitate to reach out and tell me about it. The best way to do that is to send me an email at piersonkeatingmusic@gmail.com. I’d love to hear from you!

That’s all for now.